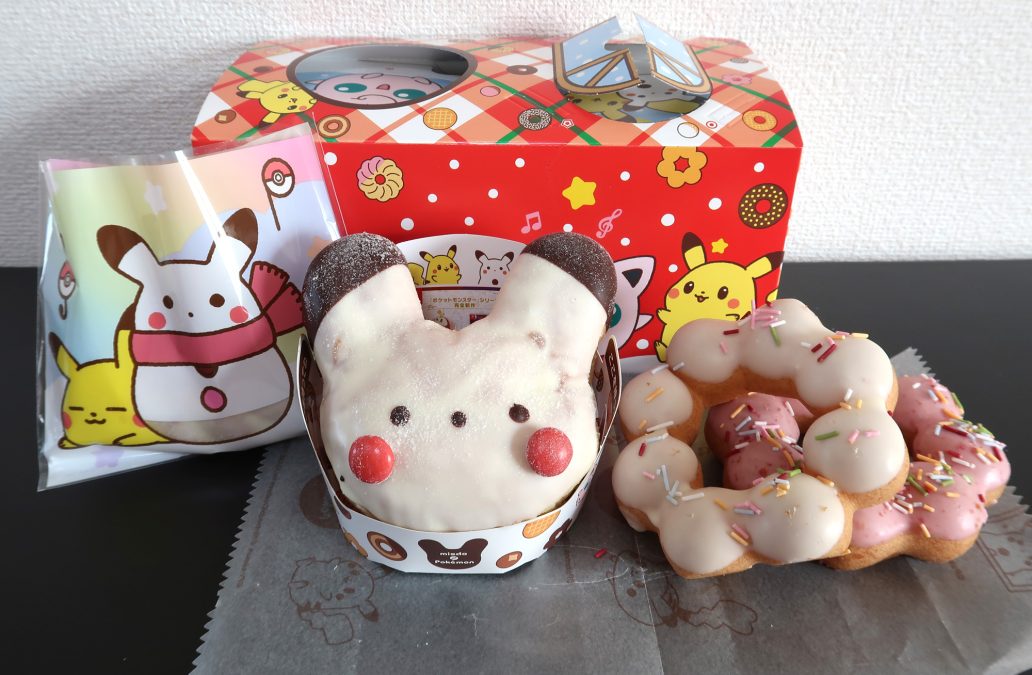 As the end of the year is coming close, the annual Mister Donut and The Pokémon Company collaboration is here to spread some joy during the Christmas season.

This year a new and winter-themed version of Pikachu joins the line-up of Pokémon donuts, Snowman Pikachu! The Snowman Pikachu has a white chocolate coating, a shimmering snowflake topping, and a whipped cream filling.

Returning for the fifth time in a row is the Pikachu donut, which contains a rich cream custard pudding flavor with chocolate. I didn’t purchase it this time, but you can check out the Mister Donut’s Pokémon Christmas Collection 2021 post that includes it.

This year a new lineup of French cruller Pokémon donuts join the party, including Pikachu, Jigglypuff, and the Snowman Pikachu. The Pikachu Snowman cruller donut is pudding-flavored with a whipped cream middle and a shiny white chocolate coating with a shimmering snowflake topping.

The box features an adorable illustration of Pikachu, Snowman Pikachu, and Jigglypuff. On the top of the box has an actual window you can open to reveal a cozy Pikachu and Snowman Pikachu.

The take-out bag features a Christmassy illustration of Pikachu and Jigglypuff.

Mister Donut also offers limited Pokémon goods that are part of a set. We decided on the glass set that features adorable illustrations of Pikachu and Jigglypuff for this set. We pre-ordered another set that we will pick up in December. We hope you all look forward to the post on that one.

The Donut Set includes one Pokémon donut, a Pokémon cruller donut, two Pon de Wreath (customers can choose which flavor), and a Pokémon item of the customer’s choice for 1,468 yen ($10.39 USD).

Here’s a peek at the Mister Donut’s Pokémon Christmas Collection 2021 campaign, which featured the Eevee donut. You can read more about it in last year’s post here.

Here’s a look at the Mister Donuts x Pokémon campaign from 2020, which featured the Chansey donut. The campaign was called Mister Donut’s Lucky Christmachu Collection, a wordplay on Chansey (Lucky in Japanese) and Pikachu’s name. You can read more about it in my post here.

The Mister Donuts x Pokémon campaign from 2019, which featured Pokémon Sword and Shield: