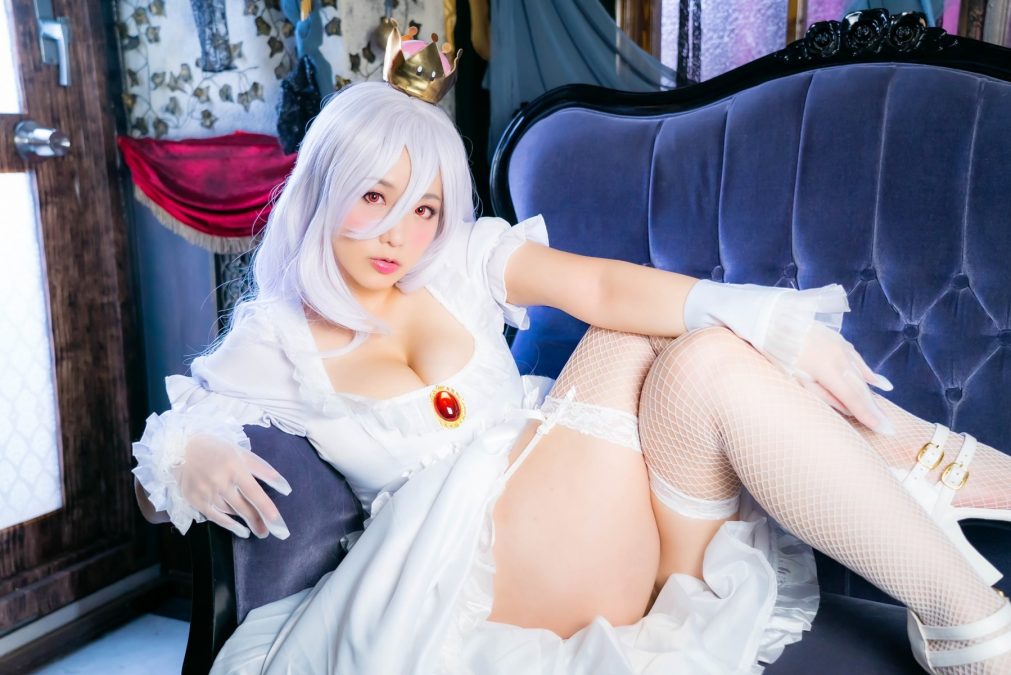 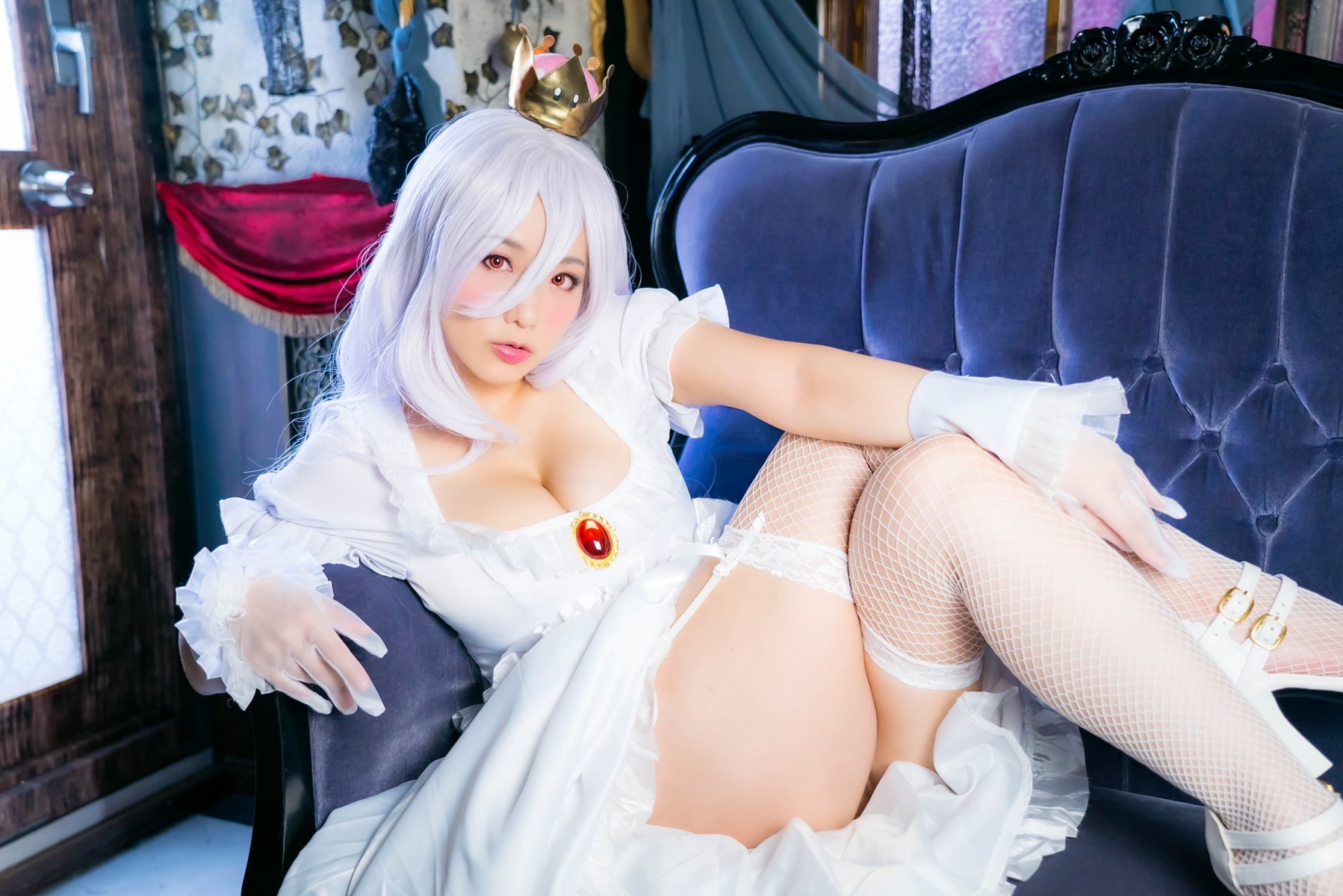 Kaho Shibuya is a Japanese cosplay model, radio host, actress, and author. She recently released her latest book titled AVについて女子が知っておくべきすべてのこと (Behind the scenes of JAV industry) that goes into detail about the JAV industry and what females should know about it before considering it.

After I finished reading the book, I felt like this book wasn’t just aimed at the female demographic and it contains knowledge that everyone can benefit from. The book is captivating and it showcases Kaho’s previous journalism job fabulously.

Without further ado, let’s dive into the interview with Kaho Shibuya!

Hi Kaho, congratulations on your book release! Thank you for taking the time for this interview! We last saw each other last year and a lot has happened since then.

How have you been?

The last time we met was Anime Expo 2019, and I have visited other overseas conventions after that until COVID happened. Despite the fact that the worldwide fear of the pandemic is still going on, my life has been busy and fulfilled, thanks to my book being published, Twitch streams, and anison DJ debut.

This year has been rather different for a lot of us with new challenges. What adjustments have you had to make?

Being a typical Japanese who always struggle to say no to someone’s face, quarantine gave me the courage to finally turn down some random drinking-party (Nomikai in Japanese, used for singles mixers like Gokon too) invitations, and the pressured socialization that comes with them. I get to focus on my favorite people and my precious solitude doing my favorite thing. So I’ve become a lot happier now!

You have done a wide variety of cosplays and you have even released a photobook based on your cosplays. What is the process of deciding a character to cosplay? and who is your favorite cosplay you have done?

Body type comes first and for my body, it has the potential to make “anime physics” look realistic. Although I’m shorter than the average even in Japan, I look taller in photos and videos, so height isn’t much of an issue.

Because I try to change my make-up style according to each character, I liked how Tsunade turned out. Eyes are the most important part of any character and hers were unique and distinctive. 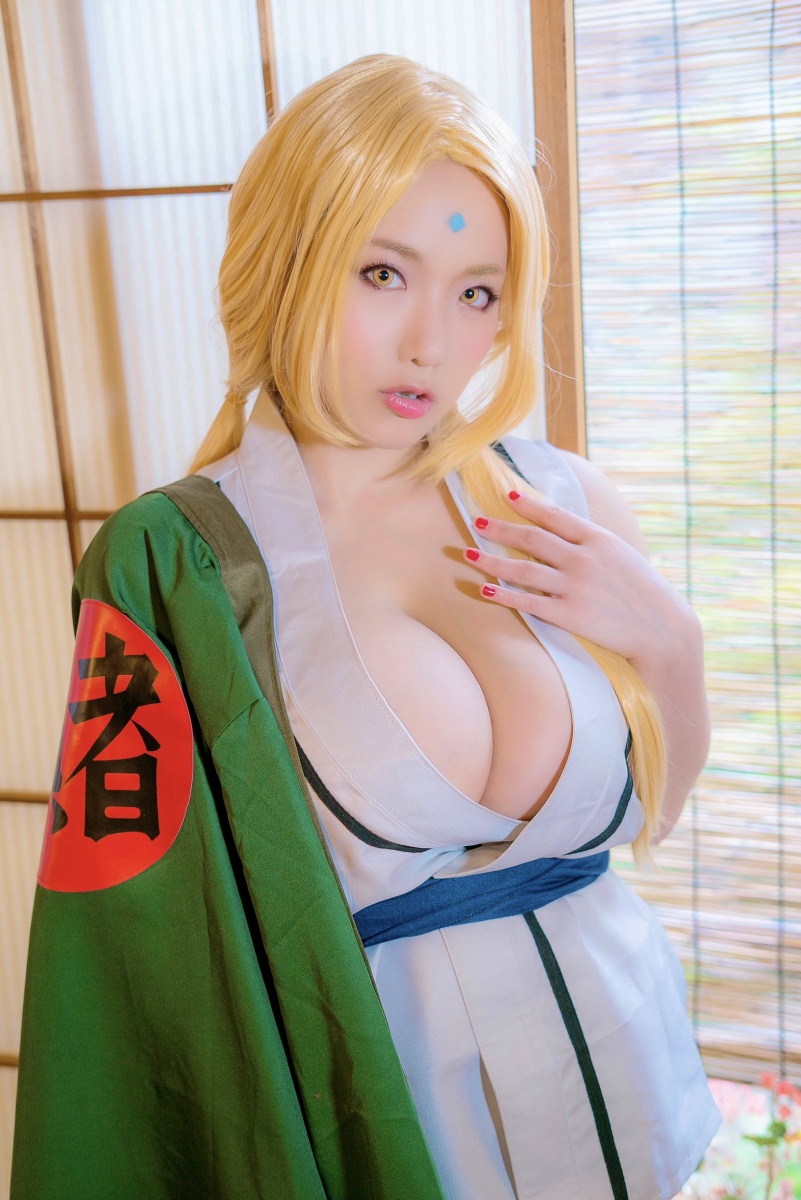 I believe that everyone knows you’re a huge otaku that loves anime and manga. What anime or manga series has taught you a life lesson that you still live by today?

I wish I met Assassination Classroom when I was still in middle school like the students in the show, then I would’ve studied harder, haha. But seriously, while many shows ignore the studying part of school life with one exceptional episode for cramming-for-exam days in order only to avoid supplementary lessons if you’re in a sports club, or a rewarding date with your hot tutor, the manga goes way deeper and teaches you the beauty of each subject and even tests.

And it’s not even a show about studying. Every classmate trains themselves to kill the teacher who could destroy the earth. The show is a well-balanced amalgamation of battle, sci-fi, comedy, human drama, and slice of life. 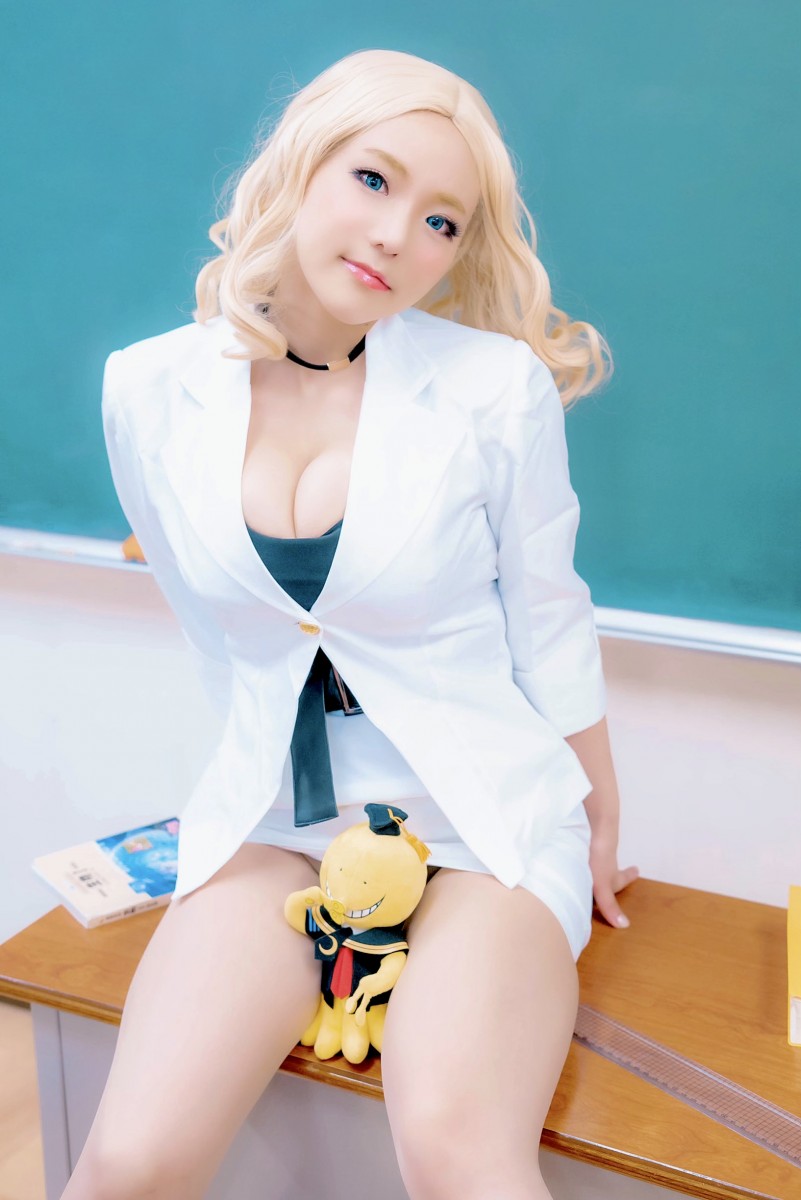 I’m a big fan of the Haruhi Suzumiya series. Have you watched the show? If so; who is your favorite character and what did you think of endless eight?

Oh, I can’t wait for the new Haruhi light novel! Although everyone is attractive in their own way, Yuki Nagato is my girl all the way.

I was doing my writing work while watching Endless Eight, so at some point, I was like “Oh my, I’ve finished so many paragraphs in one episode!”… which wasn’t the case.

I was amazed at how much KyoAni cared about tiny details and changed scene angles and animations entirely for each episode, besides the solidness of renewed yet repetitive voice acting.

If I was watching one episode a week by waiting expectantly for a new storyline, however, I could’ve felt devastated 8 times. I honestly felt lucky for being a binge-watcher.

It’s wonderful to see you streaming on Twitch. I often tune in when possible and I’ve been a big fan of the KonoSuba gacha streams. It’s a great way for fans across the world to interact with you. What motivated you to start streaming on Twitch?

I deeply miss conventions, talking about anime, manga, and Japanese culture with people in other countries. Streaming was my way to connect with those whom I wanted to meet at conventions but couldn’t this year. But since Twitch has become my favorite place to be, I’m planning to stay there after quarantine as well.

I’ve grown to love the community so much. When I did Instagram lives a few years ago, all the comments came and went too fast and they were mostly like “Hey sexy” or “Jiggle, baby, jiggle” so often I couldn’t even try to have a conversation at all.

My Twitch chat is very supportive and understanding of me as an individual, not a fantasy, maybe more like a fellow weeb. I’m really comfortable there. Now I can’t wait to visit anime conventions even more, because I want to see their faces and tell them how much I appreciate their support. My management team and I have already talked about having a “mod dinner” for the helpful and hardworking moderators when we get to travel and guest conventions again. Of course, it’s my treat.

Is there any type of new content for Twitch that your fans should look forward to?

I had my anison DJ debut at LUMICA Night -Halloween- World Livestream on October 31st. I am more eager to have a practice DJ stream on my channel too. I’m still learning how to use the new equipment such as the audio interface. I’m quite technologically-challenged, though I’m willing to learn more and more.

I’m sure the fans would love to know more about your book AVについて女子が知っておくべきすべてのこと (Behind the scenes of JAV industry) directly from you. Can you tell us more about it?

I didn’t want to make it just as a personal memoir or gossipy exposé, but more about telling and educating readers how the JAV industry works and what is going on behind the pixels.

Now actresses get paid for their footages’ secondary use, which was impossible before, albeit the pricing is minuscule. I submitted my list and payment of that in the book, along with the amount of money I received when I was active as an actress. This book has data, hence truth, which was hiding behind fan-service and mosaic.

That is the reason why this book is oriented towards girls, who need the reality for their own sake if they are thinking about becoming a JAV actress or are being recruited right now as I write this. I hope those women can learn what they should expect in the industry beforehand.

Do you have plans to release your latest book AVについて女子が知っておくべきすべてのこと (Behind the scenes of JAV industry) in English?

Although a lot of people have asked me the question, that’s not something an author can make it happen on their own. We’ve got to be approached by a decent English publisher. Kind of the same thing when fans ask me “Please come to our local con,” and I tell them “Please ask them to invite me because they care about attendees the most and whether we guests can bring more of you.”

It’s about demands, not my wants. So all I can do is to make my name big and get noticed. That is something I’m always planning to achieve.

What are your upcoming plans for 2021?

Even though small events are happening in Japan, with shorter opening hours and a limited amount of people, I choose not to attend any of those in 2020. I don’t want to encourage anyone to go outside.

Some time next year when everything is safe enough so that we can have visitors from overseas and we get to travel to other countries, I’ll be ready to announce “Meet me at…” on my social media.

Until then, I’d like to keep myself busy in my tiny apartment (I’m seriously thinking about moving out after the arrival of a huge gaming chair…) and often venture outside for work and to have my own personal relaxing time.

The movie theatres have recently opened back up in Japan and I have watched various movies including Violet Evergarden, Shirobako, Demon Slayer, and Given in the past month. I also plan to watch the upcoming Evangelion and Detective Conan movies next year!

Thank you for taking the time to be interviewed. Do you have a message for the fans?

Thank you, profusely, for your nice and fun messages. It’s been impossible to communicate with you in person at events, but with my live streams and guest appearances on podcasts, I feel like we’ve gotten closer despite quarantine. My book is currently available only in Japanese, so I’m glad I was able to have this interview. I hope you have enjoyed it. Thanks! 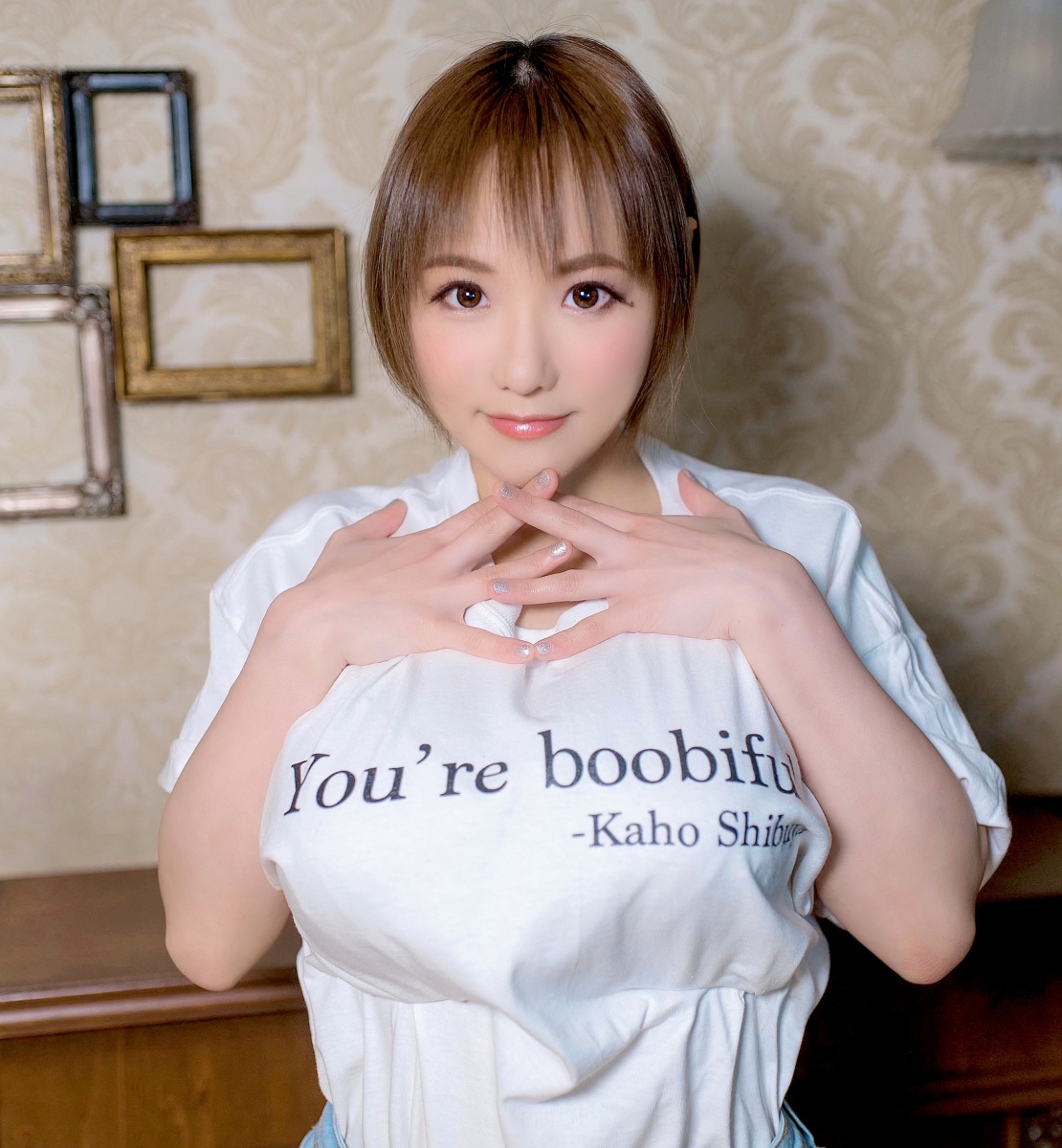 Thank you everyone for reading this interview! Go show Kaho Shibuya some love by checking out her Twitter, Instagram, and Twitch!