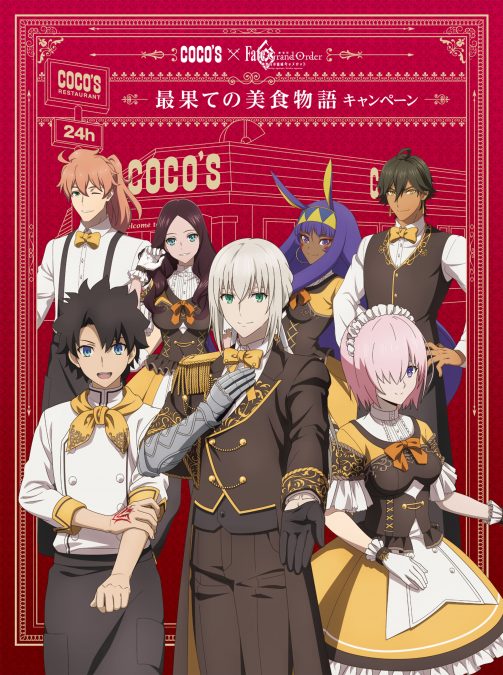 The Japanese family restaurant COCO’s is currently holding a collaboration event for Fate/Grand Order’s most recent movie, the second installment of the two-parter Fate/Grand Order The Movie -Divine Realm of the Round Table: Camelot, Paladin Agateram. The campaign debuted on May 13, 2021, and will run until June 23, 2021.

Select COCO’s restaurants throughout Japan will display life-size cutouts of characters from the Fate/Grand Order series. The restaurant I visited had Nitocris on display. 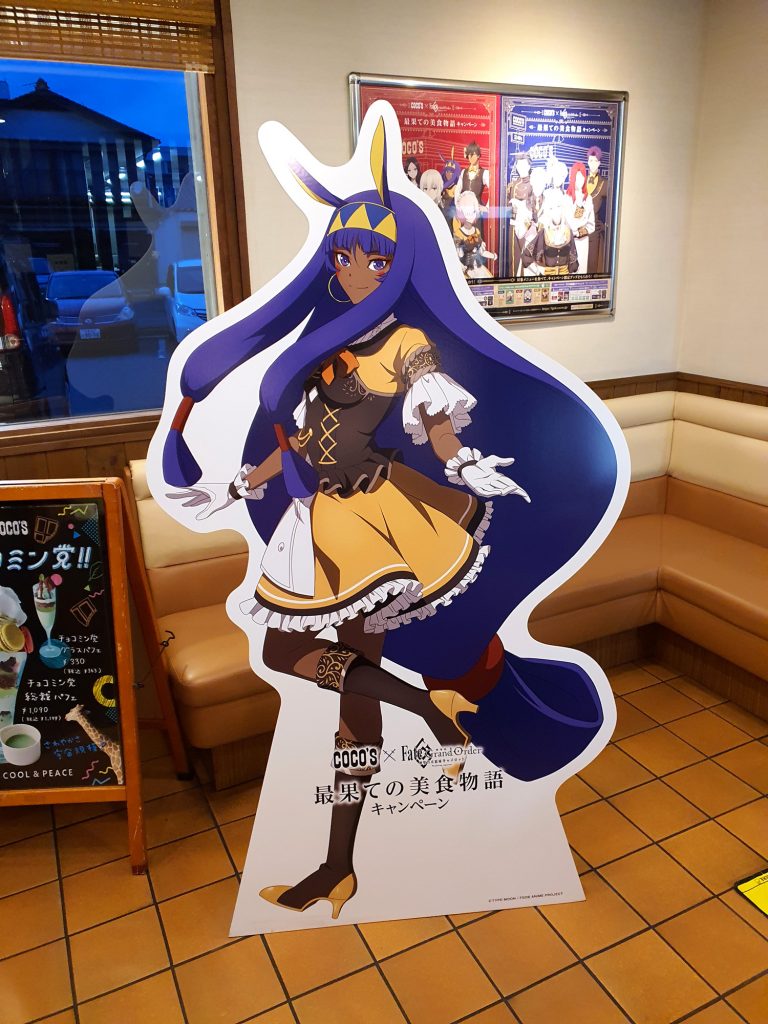 Life-size Nitocris at the entrance of the restaurant 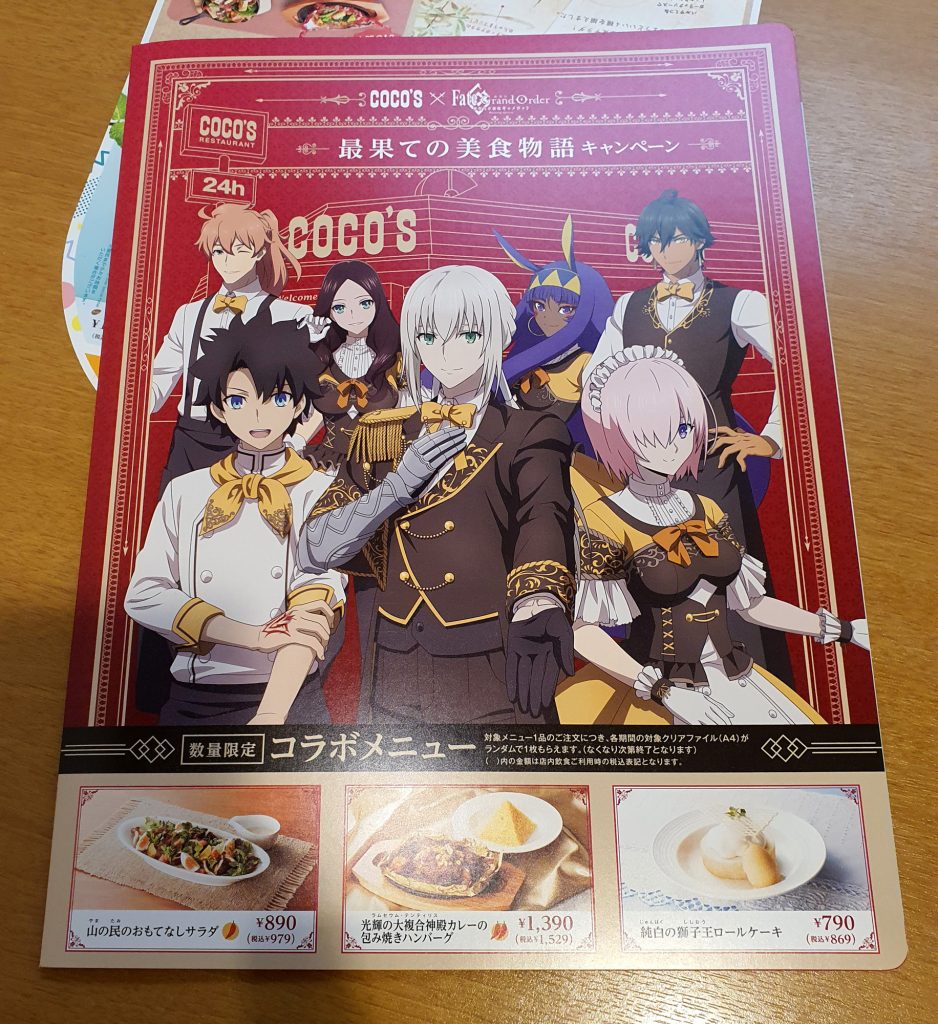 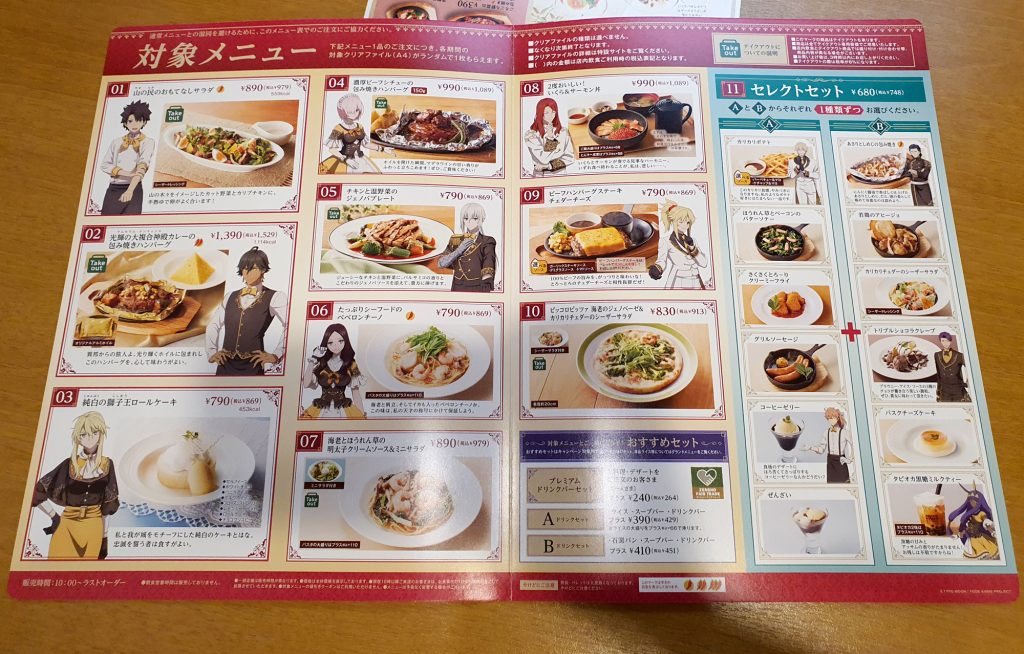 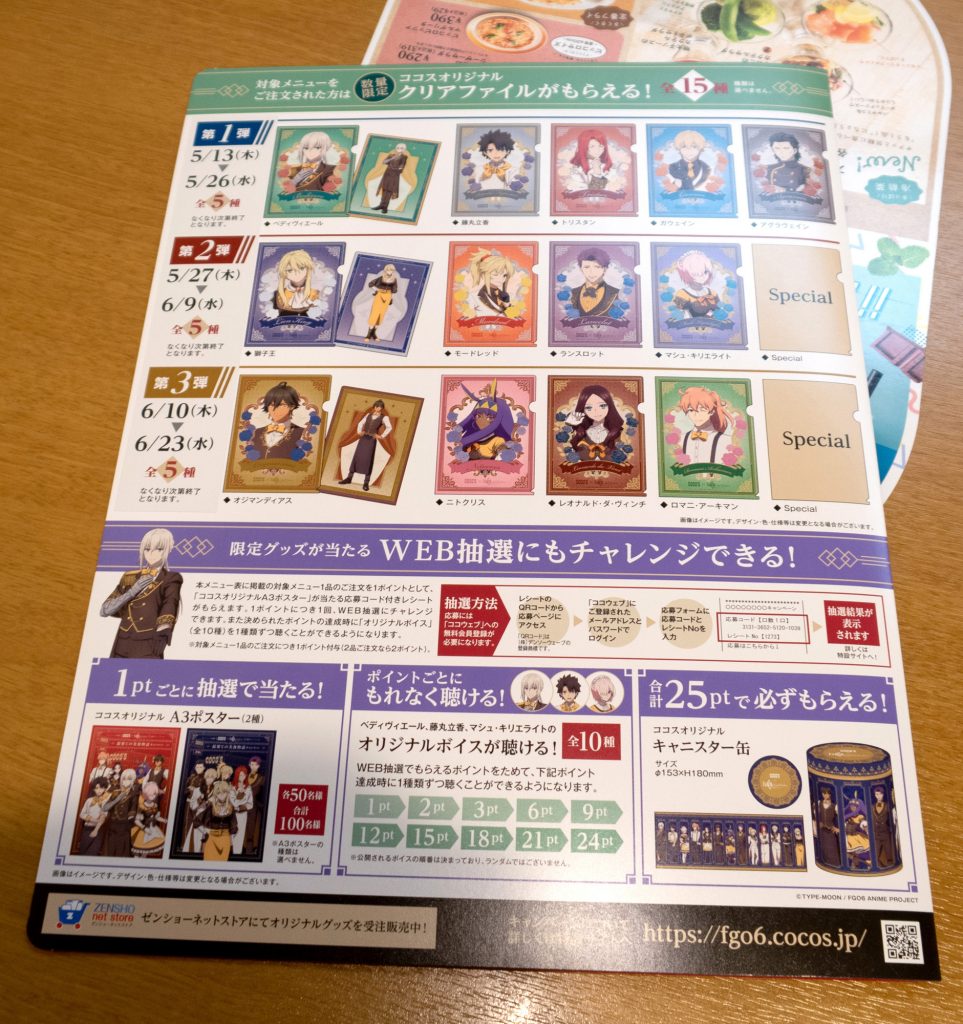 Ritsuka Fujimaru’s recommendation of the Yama no Tami Omotenashi salad consists of soft boiled eggs, mushrooms, tomatoes, and Caribbean flavor chicken. This dish is inspired by the mountain trees. 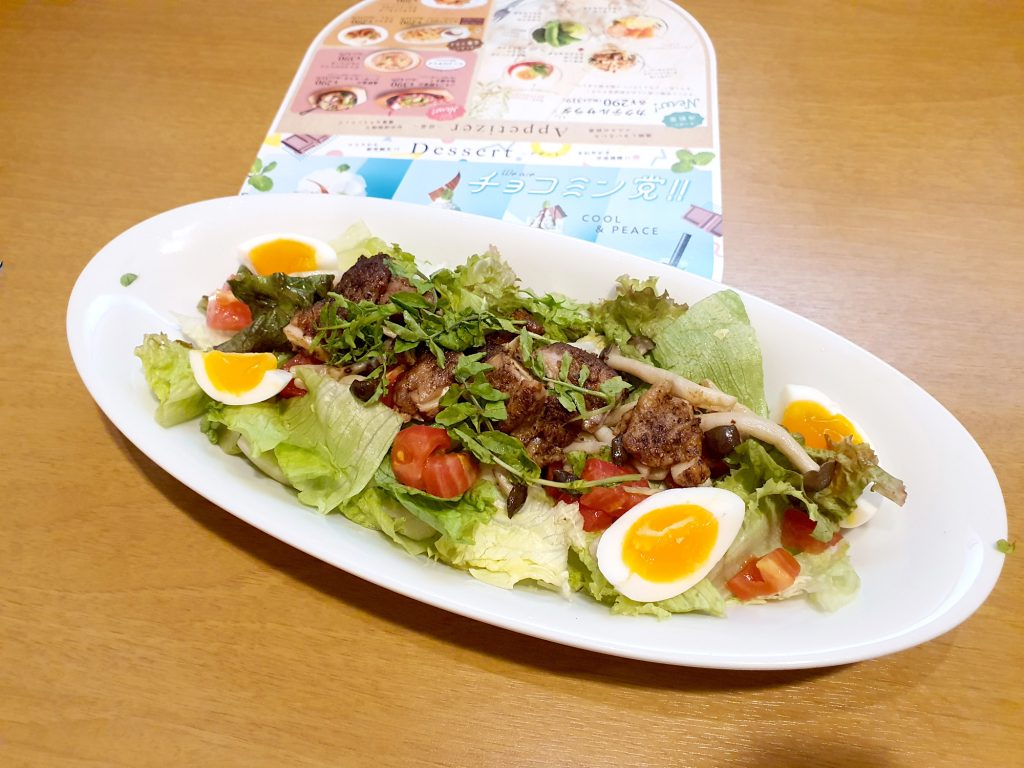 Aka no Saber’s recommendation was a hamburger steak wrapped in melted cheddar cheese with a side of broccoli and corn. You had a choice between garlic steak, demi-glace, or tomato for the sauce topping. A cooking stone is included if you want to cook your meat more. 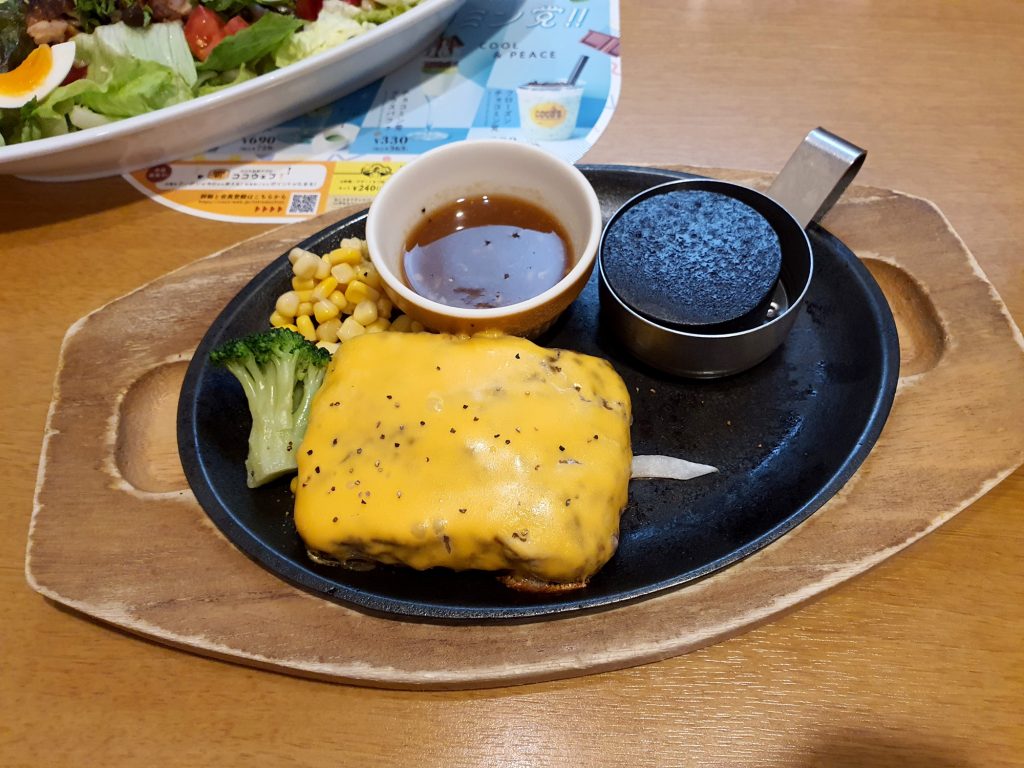 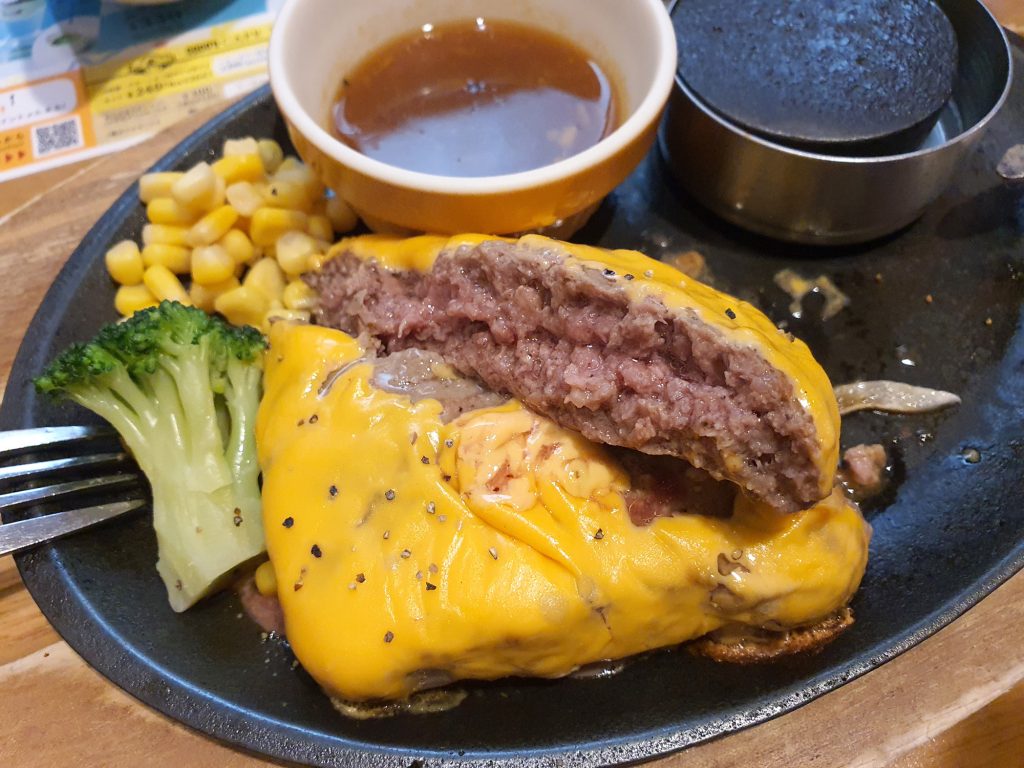 Ozymandias’ recommendation is The Shining Great Temple Complex curry-wrapped hamburger steak. It comes in a yellow-gold foil outer packaging that you slice open to reveal the insides. A plate of pyramid-shaped rice is also included with this dish. 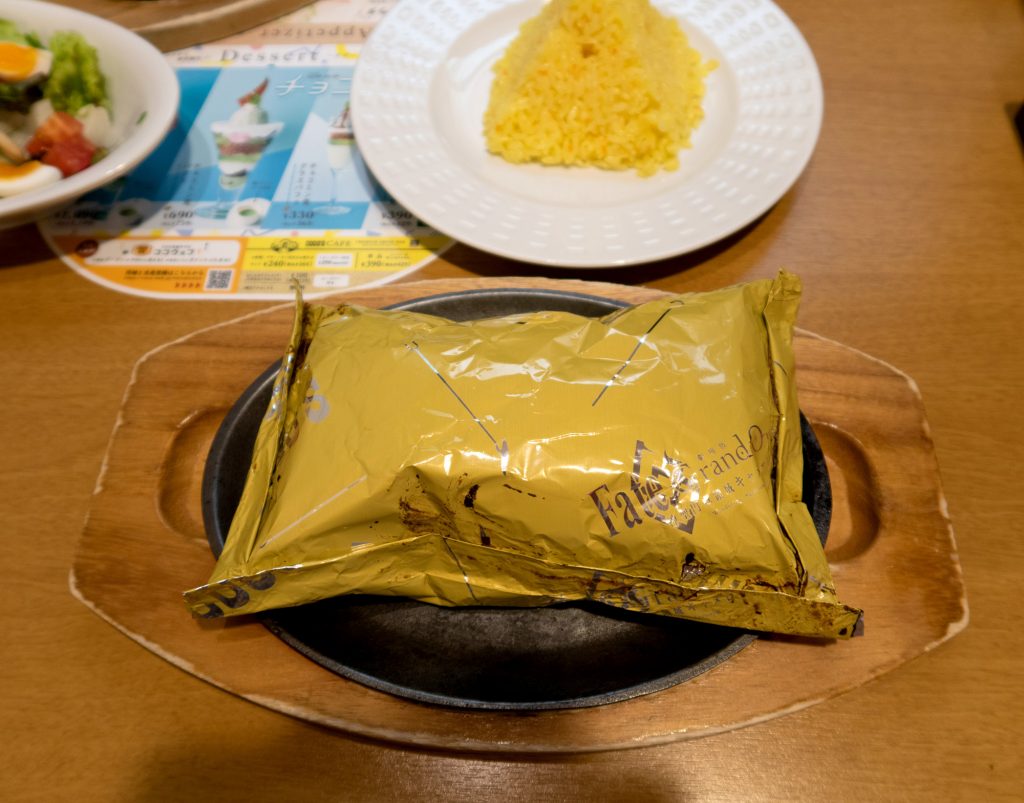 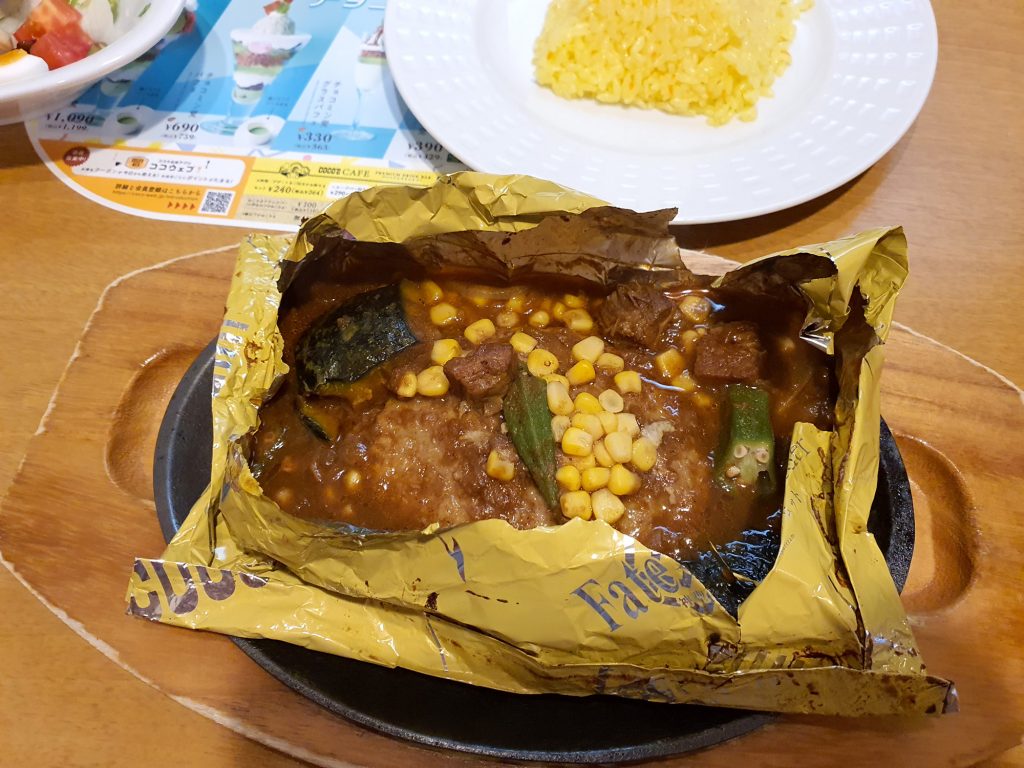 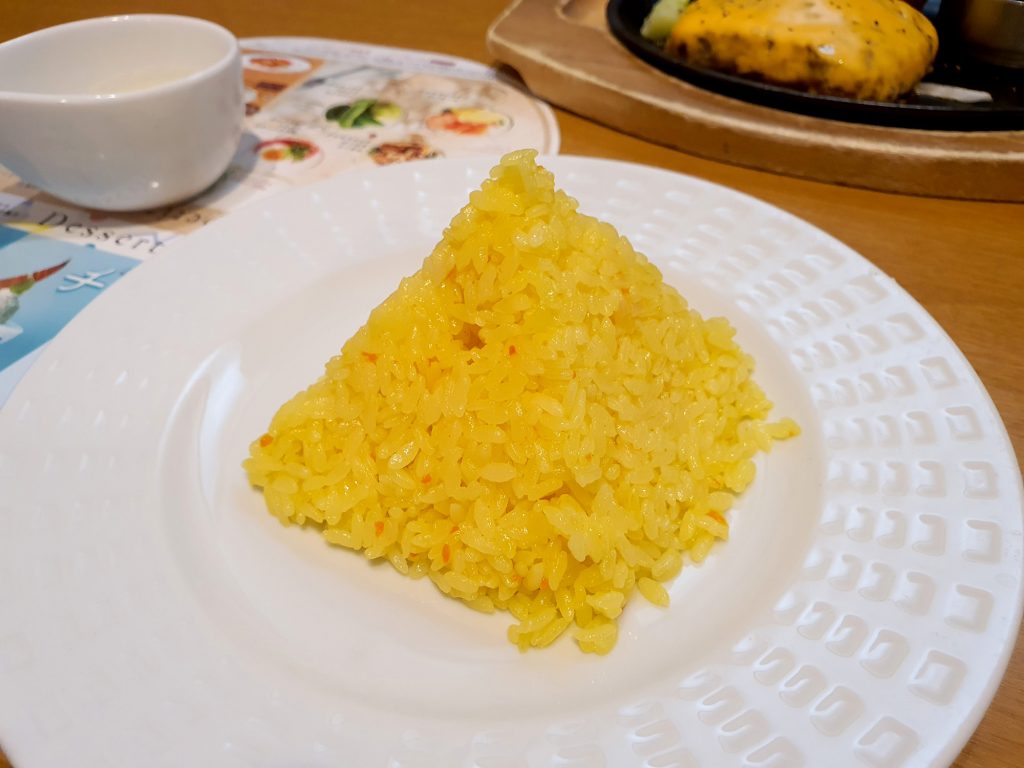 Mash Kyrielight’s recommendation is the wrapped Madeira beef stew with hamburger steak that comes with a side of a baked potato. 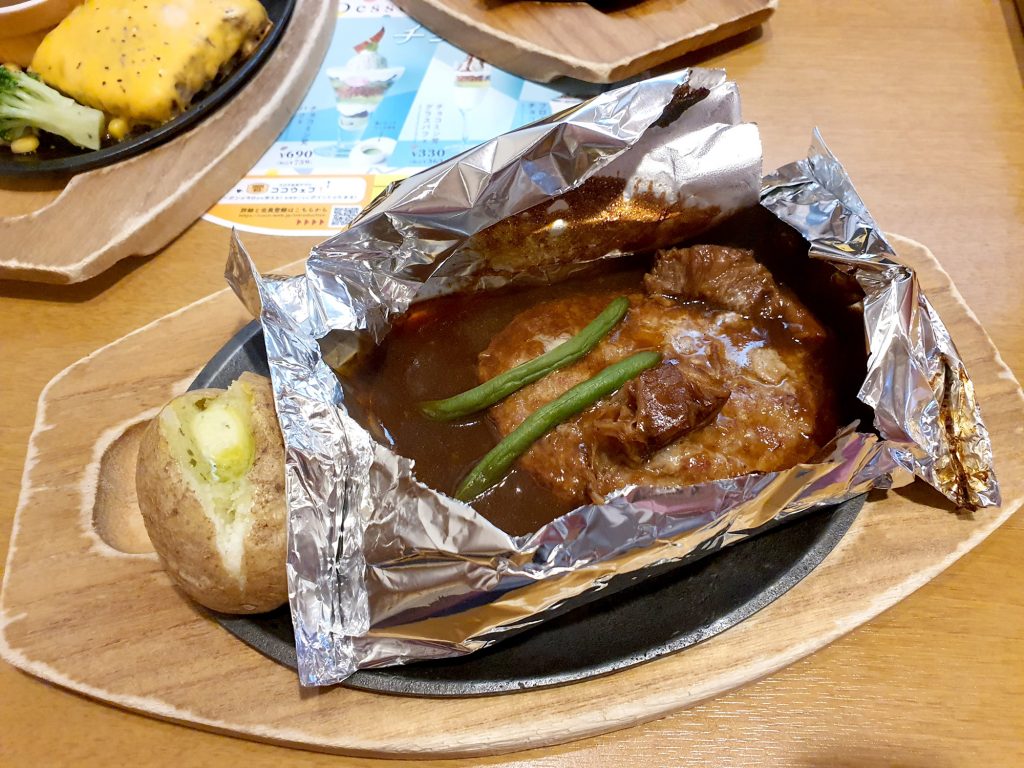 Bedivere’s recommendation is the Pure White King Lion Roll Cake inspired by the character’s personality. It consists of a soft roll cake filled with cream and frozen fruit, topped with fresh cream, white chocolate, topped with a mint leaf, and a scoop of ice cream on the side. The character states on the menu that you must pledge allegiance to be able to eat it. 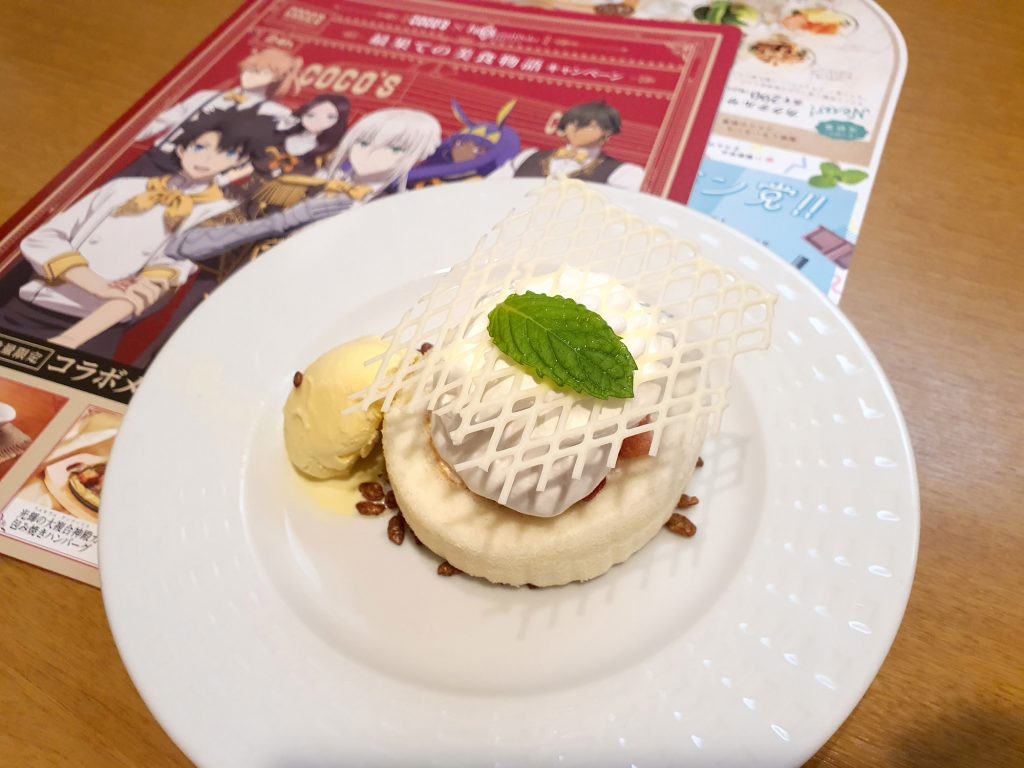 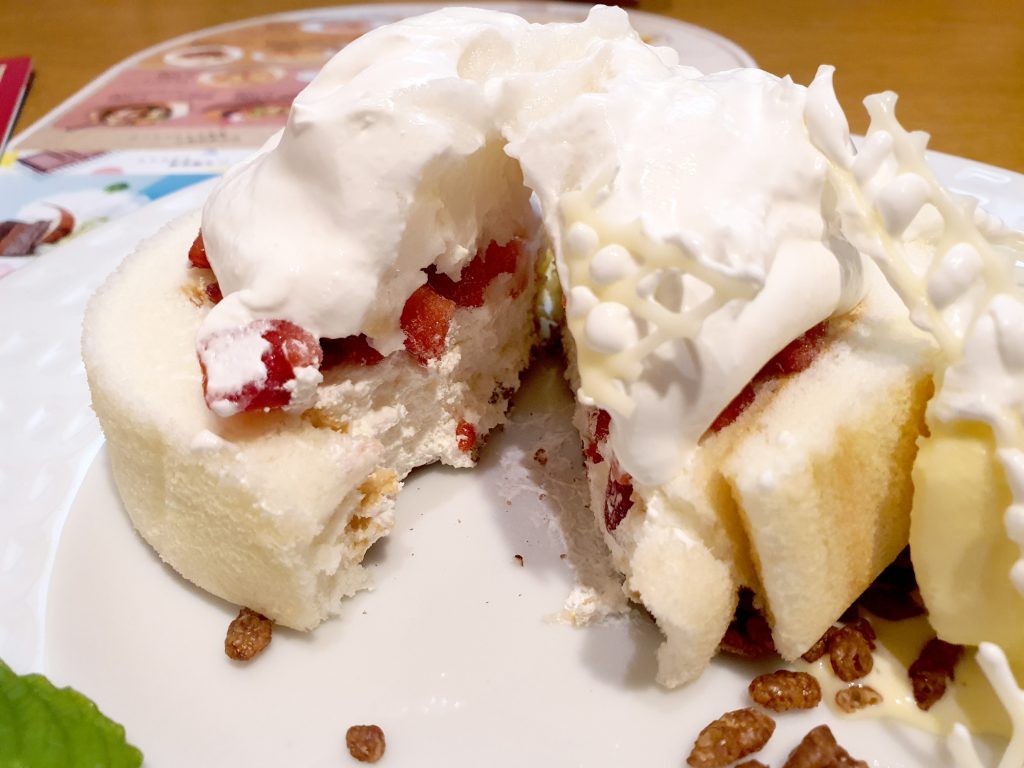 Lancelot’s recommendation is a sweet triple chocolate crepe. It’s a chocolate brownie coated in cream and wrapped in a soft crepe, topped with cream and a mint leaf, and a scoop of chocolate ice cream on the side with the whole dish drizzled with chocolate sauce and choco pops. 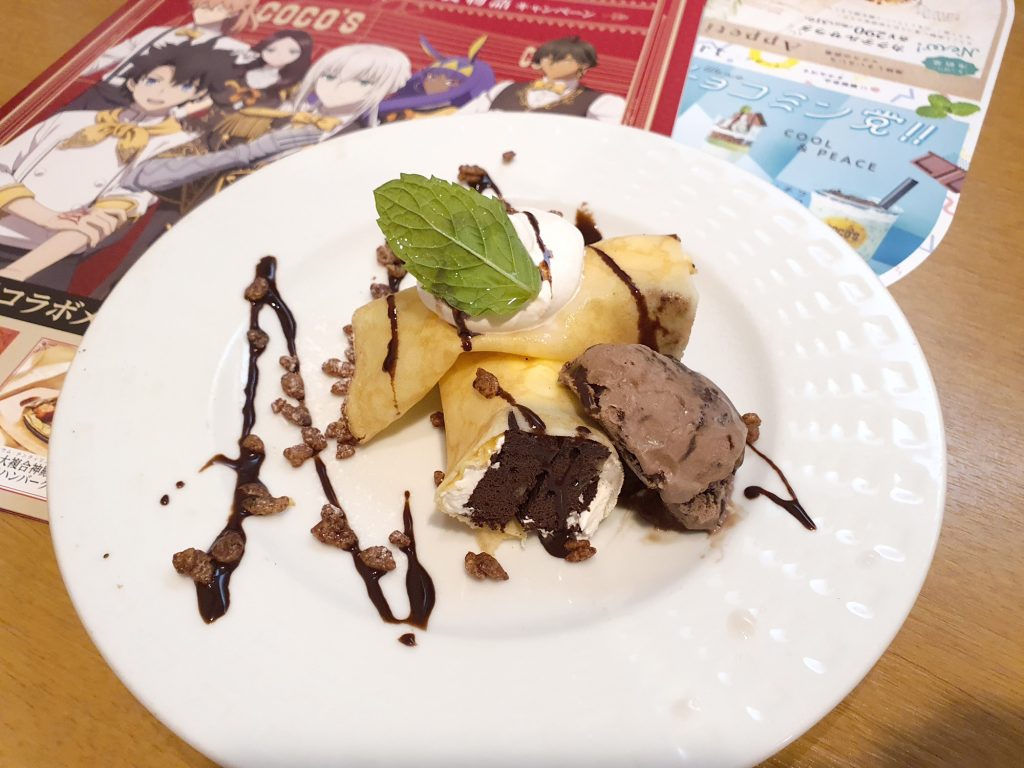 Romani Archaman’s recommendation is a coffee jelly in a dessert cup, topped with cream and a scoop of ice cream, and a mint leaf. 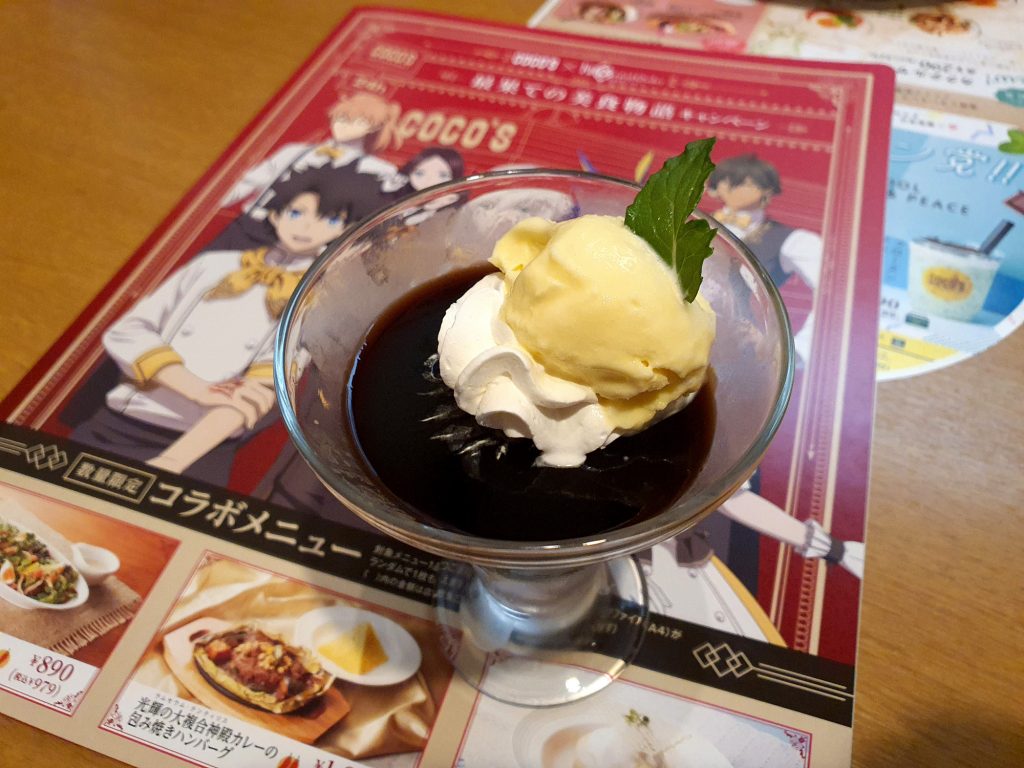 Customers who eat at COCO’s restaurants for the collaboration will be able to use their receipts to enter an online lottery prize drawing. The prizes are A3-sized posters featuring the original Fate/Grand Order x COCO’s illustration limited to 50 people. 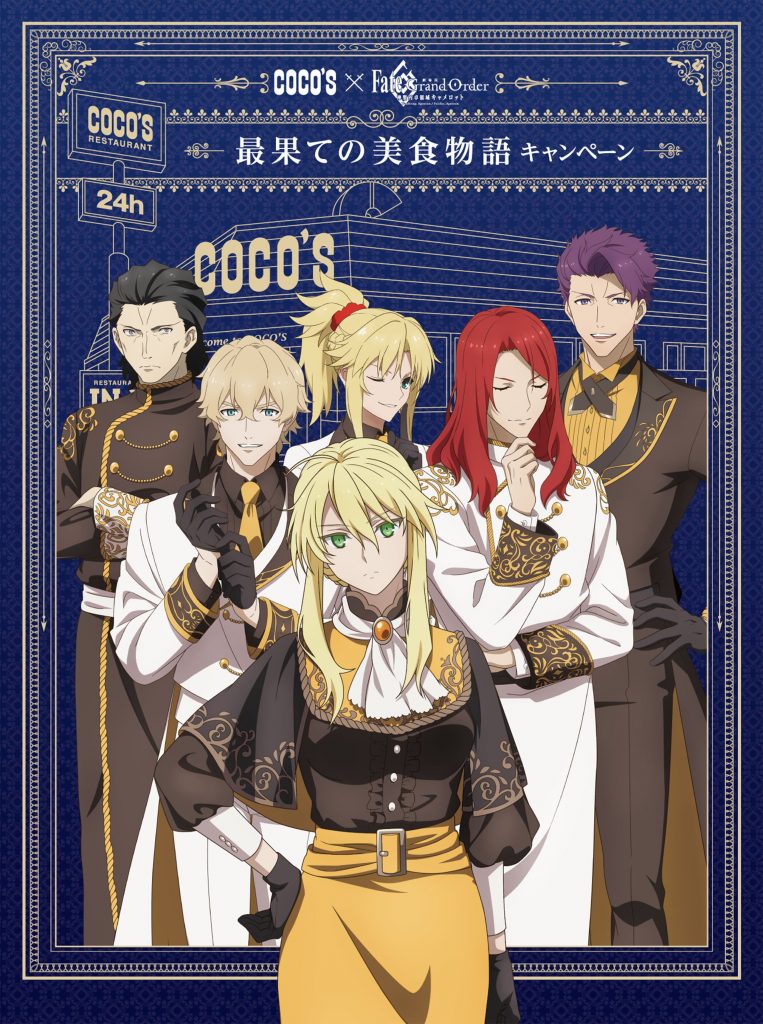 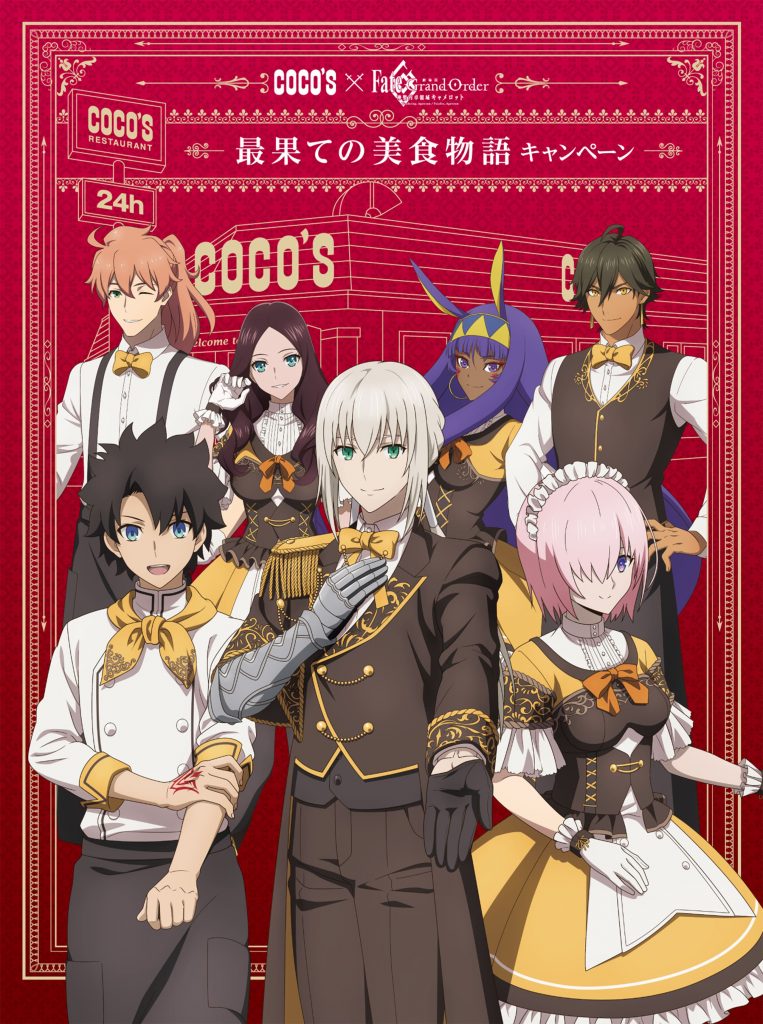 If you’re able to accumulate 25 points you can turn them in for an original can featuring various characters in their COCO’s uniform. It’s scheduled to be delivered after the middle of September. 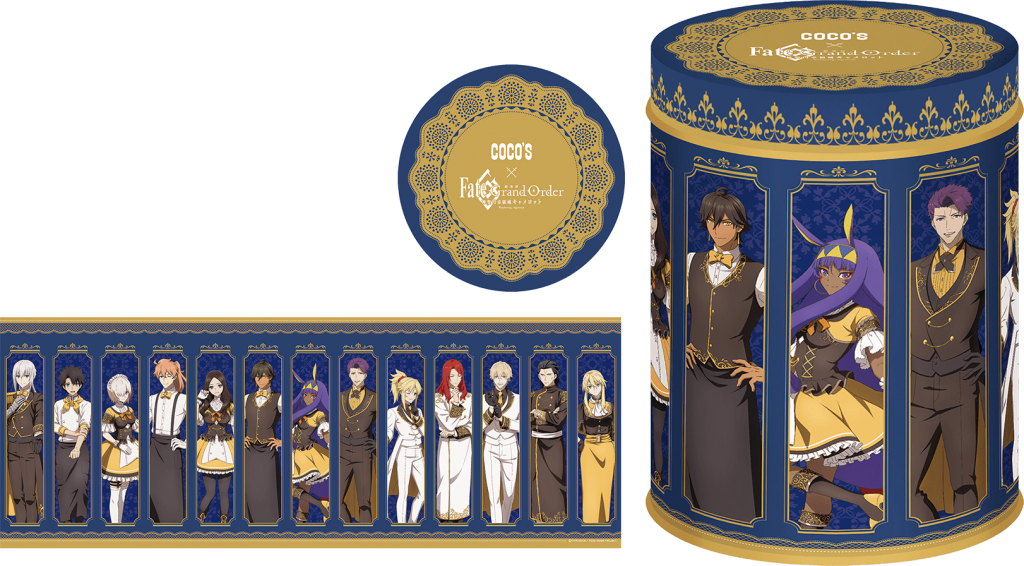 Select COCO’s restaurants throughout Japan also offered some merchandise for sale, in the form of gacha acrylic figures for 880 yen ($8.03 USD) each. 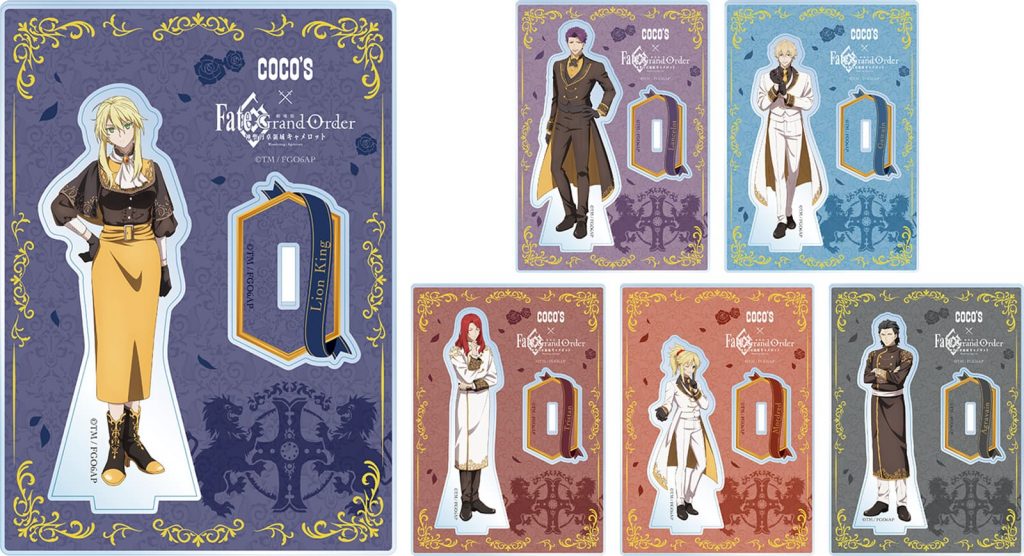 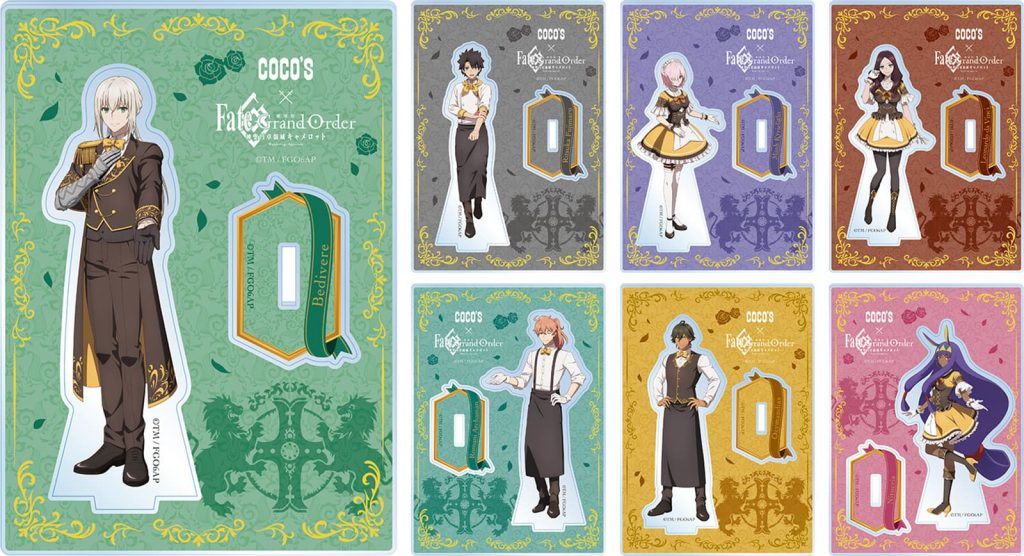 The restaurant also featured a flag outside and wall posters of the event’s illustration inside. 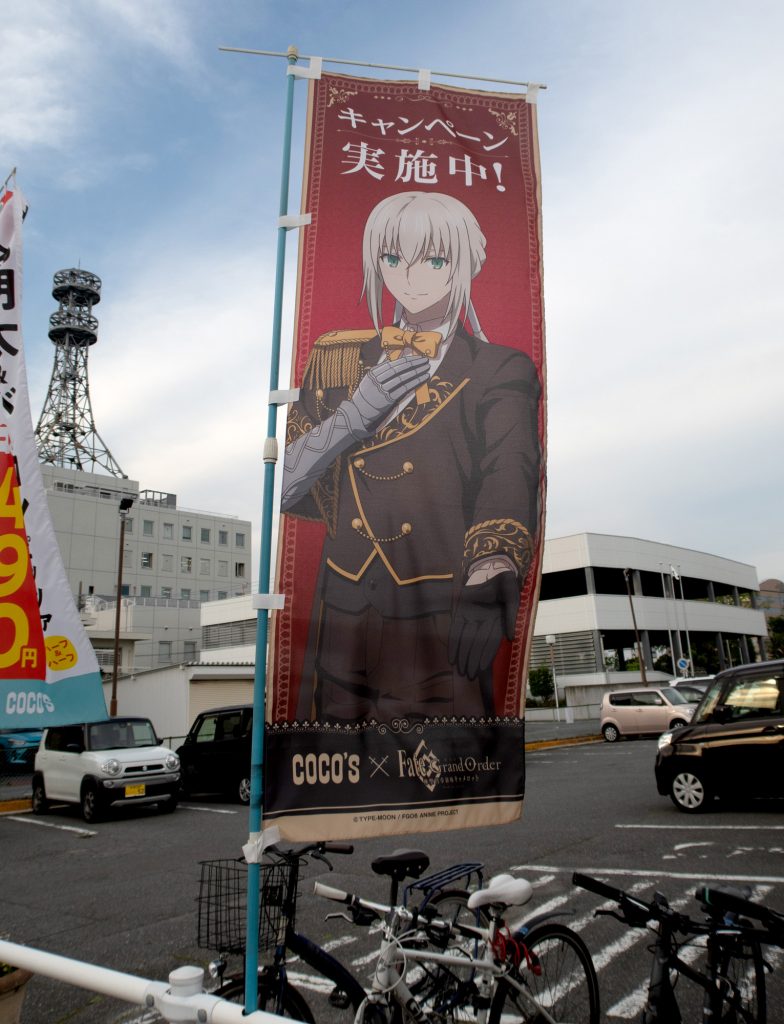 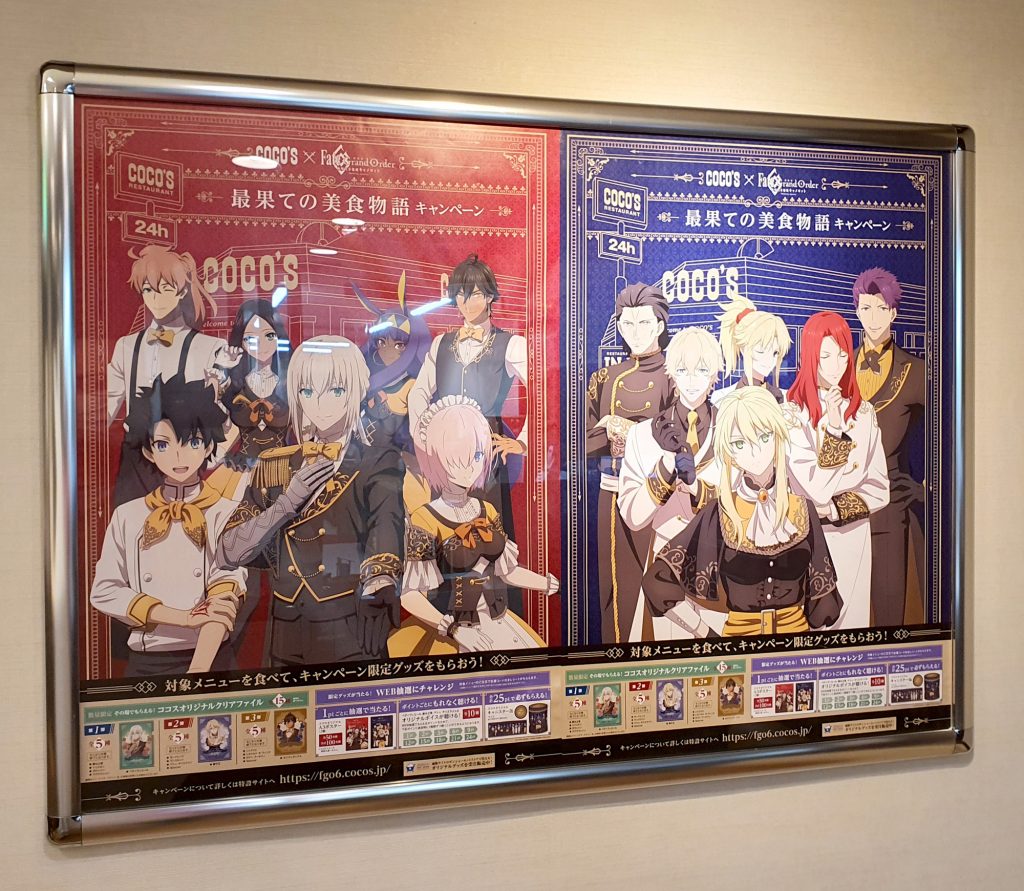 Overall the experience was enjoyable and during dining, the speakers throughout the restaurant would randomly play voice lines of the characters. I also got lucky with the clear files and got one of the original illustrations. 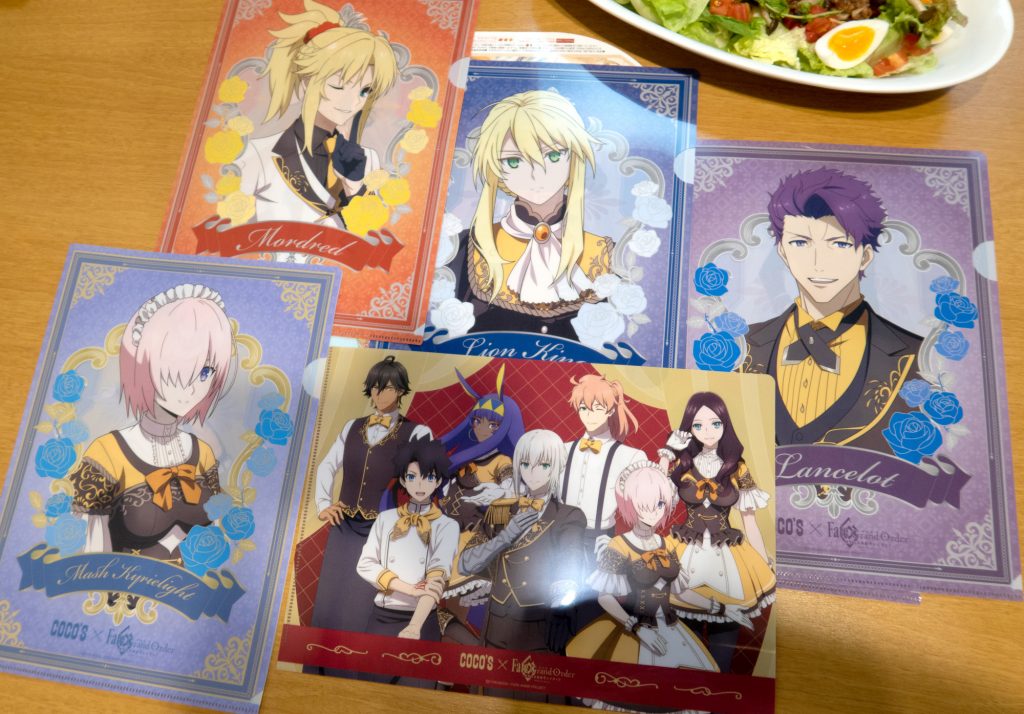