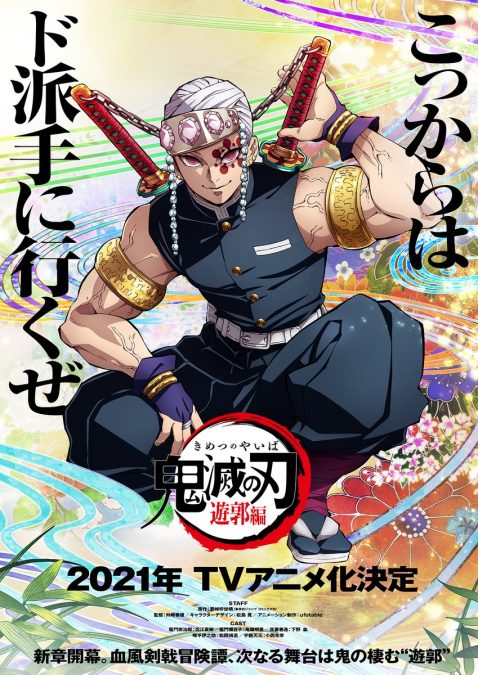 During the Demon Slayer Anime 2nd Anniversary Festival event on Sunday, it was revealed that Koyoharu Gotouge’s Demon Slayer: Kimetsu no Yaiba manga series will be receiving a new TV anime season. The second season will be titled Demon Slayer: Entertainment District Arc (Kimetsu no Yaiba: Yuukaku-hen) and is slated to air sometime in 2021.

The confirmed staff so far is as follows:

The cast from the first season will be returning including Katsuyuki Konishi (Tatsumi Oga from Beelzebub) as Tengen Uzui. 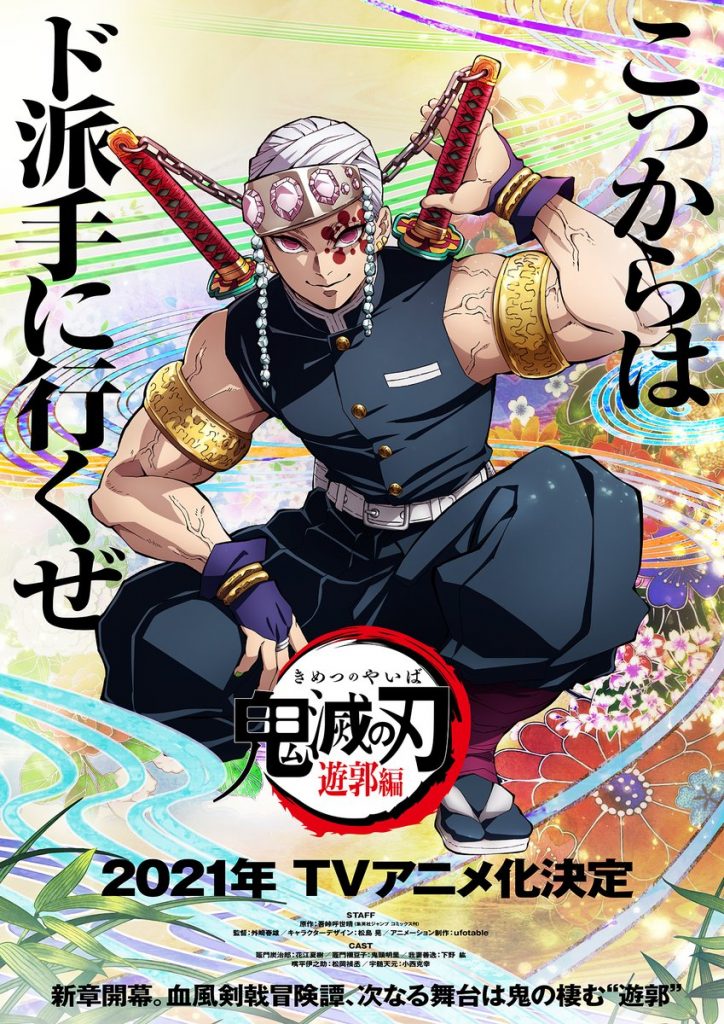 Demon Slayer: Kimetsu no Yaiba is a Japanese manga series written and illustrated by Koyoharu Gotouge. It follows Tanjiro Kamado, a young boy who wants to become a demon slayer after his family is slaughtered and his younger sister Nezuko is turned into a demon. It was serialized in Shueisha’s shonen manga magazine Weekly Shōnen Jump from February 2016 to May 2020, with its chapters collected in 23 tankobon volumes. It has been published in English by Viz Media and simulpublished by Shueisha on their Manga Plus platform.

A 26-episode anime television series adaptation produced by Ufotable aired in Japan from April to September 2019. A sequel film, Demon Slayer: Kimetsu no Yaiba the Movie: Mugen Train, premiered in October 2020 and became the highest-grossing anime film of all time. A second season, titled Kimetsu no Yaiba: Yuukaku-hen, will premiere in 2021.

As of December 2020, the manga had over 120 million copies in circulation, including digital versions, making it one of the best-selling manga series of all time. Meanwhile, the anime series has received critical acclaim, with critics praising the animation and fight sequences. It has received numerous awards and is considered one of the best anime of the 2010s. As of December 2020, the Demon Slayer franchise is estimated to have generated total sales of at least ¥270 billion ($2.6 billion) in Japan. – Wiki

Ever since the death of his father, the burden of supporting the family has fallen upon Tanjirou Kamado’s shoulders. Though living impoverished on a remote mountain, the Kamado family are able to enjoy a relatively peaceful and happy life. One day, Tanjirou decides to go down to the local village to make a little money selling charcoal. On his way back, night falls, forcing Tanjirou to take shelter in the house of a strange man, who warns him of the existence of flesh-eating demons that lurk in the woods at night.

When he finally arrives back home the next day, he is met with a horrifying sight—his whole family has been slaughtered. Worse still, the sole survivor is his sister Nezuko, who has been turned into a bloodthirsty demon. Consumed by rage and hatred, Tanjirou swears to avenge his family and stay by his only remaining sibling. Alongside the mysterious group calling themselves the Demon Slayer Corps, Tanjirou will do whatever it takes to slay the demons and protect the remnants of his beloved sister’s humanity.