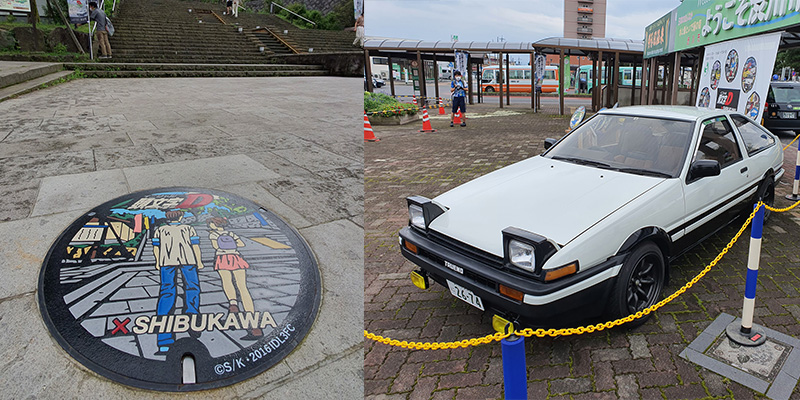 If you’re a fan of the Initial D manga series written and illustrated by Shuichi Shigeno and happen to be in Japan a stamp rally (スタンプラリー) event titled Initial D x Shibukawa (頭文字DxSHIBUKAWA) just began on the 1st of August 2020 and will run until the 31st of July 2021.

The story of Initial D is centered on the prefecture of Gunma and the town of Ikaho located in Shibukawa, Gunma prefecture, that serves as the location for the setting of the series. Which makes this collaboration even more fascinating for enthusiasts of the series.

Throughout the event, you can find a total of 7 Initial D-themed manhole covers across Shibukawa and if you can find all of them and log your progress on the butaimeguri (舞台めぐり) smartphone application you can get a limited original clear file (Limited to the first 1000 people who complete all steps).

Some of the busses from Shibukawa station – Ikaho Onsen and Shibukawa station – via Mizusawa to Ikaho onsen feature a special Initial D wrap and if you take a picture of it and post it on social media with the hashtag (#頭文字DxSHIBUKAWA) you can get an original Initial D postcard (Limited to the first 1000 people). You can claim the clear file and postcard at the following address: 伊香保ロープウェイ不如帰駅観光案内所（渋川市伊香保町伊香保560番地1）- Click here for the Google Maps.

Right next to the first manhole cover located at the plaza in front of Shibukawa station (渋川駅前プラザ前) is a map that shows you the location for the rest of the Initial D manhole covers.

A store within the same area also featured some promotional posters and flags for the campaign.

The second manhole cover is located at the municipal parking spot (市営駐車場前).

The third one is located in front of a public toilet at the Ikaho Alley of literature (公衆トイレ前).

The fourth one is located at the Ikaho Stone Steps on the way to the Ikaho shrine (伊香保神社下).

The fifth one is located at the start of the Ikaho Stone Steps (石段下広場).

The sixth one is located at the north parking lot in Shibukawa Al Wynn park (アルウィン公園北駐車場).

The final one is located at the starting area for the Initial D series, Yaseone Pass (ヤセオネ峠)!

Since we were in the area, we had to stop by the sacred Lake Haruna (榛名湖) which has been featured various times in the anime series under the fictional name Lake Akina.

For a limited time, you can get a manhole card featuring the first Initial D manhole cover on it.

Here’s a closer look at the Initial D x Shibukawa flyer from the official website.